Potassium Deficiency – What You Need to Know

No matter how green-fingered we are, sometimes our plants just don’t live up to expectations. This month, we’re focusing on diagnosing and treating potassium deficiency to help you get the most from your garden. 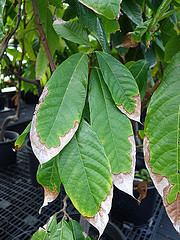 Photo by Scot Nelson / CC BY

Why is potassium important?

Plants need potassium for many vital processes, such as protein synthesis, photosynthesis and water uptake. Besides ruining their appearance, potassium deficiency can also make plants more susceptible to frost damage and disease. It also slows growth and reduces crop yields, so fruit and veg gardeners should be especially wary.

Who is at risk?

Potassium deficiency is most common with light, sandy soil where the highly soluble potassium can easily be washed away. Chalky or peaty soil without much clay may also suffer, as can unimproved heavy clay.

The most obvious sign is leaves curling up and turning brown at the edges, giving a scorched appearance. Leaves may also turn yellow between their veins (known as chlorosis) and purple spots might appear on the undersides. These symptoms generally appear first on older, lower down leaves, giving you time to fix the problem before it spreads.

Potatoes, brassicas, tomatoes, apples and soft fruits are all frequently affected by potassium deficiency, but may display slightly different symptoms, as outlined below.

With all of these, affected leaves may appear dull and blue-green in colour and/or take on a bronzed appearance, as well as the more common yellowing between veins.

On potatoes, the spots on the underside of their leaves may be brownish in colour and, if no action is taken, you could end up with fewer and smaller potatoes come harvest time.

Brassicas tend to suffer significantly from scorched edges, while reduced growth rate can give leaves with a much tougher than normal texture, both of which make them much less palatable.

Chlorosis in tomatoes may leave grey patches, rather than the usual yellow, although yellow and orange patches can also occur. Reduced growth rate may give woody stems and fruits which do not ripen evenly, leaving green patches around the stalks.

Apple trees tend to show the typical ‘scorched’ edges and yellowing between veins, but may also produce fruit which is more acidic than normal or has a woody taste.

Shoots and branches may suffer from dieback and, although you might see a lot of blossoms early in the year, commonly these will result in few fruit which will be of a poor quality.

What can you do?

If you’ve had any of these problems in previous years, or have any of soil types mentioned above, it will be probably be worth adding a high potassium fertiliser before planting. If you’re plants are already in the ground and showing any of the danger signs discussed, try adding a fast acting potassium-rich fertiliser, such as sulphate of potash.

Leave your comment
Shopping cart (2) Wishlist (0)
There are 2 item(s) in your cart. 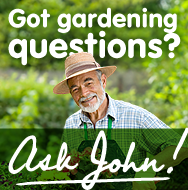 This organic based powder fertiliser, is an excellent alternative to Growmore.
£16.11 incl VAT

The cycle created by this organic fertiliser is a significant reason for its importance.
£1,267.20 incl VAT

This specialist fertiliser was developed by the John Innes Institute as a balanced fertiliser base for soil based composts.
£42.60 incl VAT

A cost effective micro-granular fertiliser for control of moss and weeds, including broadleaved weed species, while feeding grass for a lush green lawn.
£41.28 incl VAT

This specifically formulated organic based fertiliser is for use on Pony grazing paddocks.
£38.88 incl VAT

This specifically formulated organic based fertiliser is for use on Pony grazing paddocks.
£807.00 incl VAT

A 1 tonne bag of UK produced poultry pellets. Ideal for adding nutrients and organic matter to improve plant growth and soil structure, releasing their nutrients slowly and breaking down naturally to improve the fertility of the soil.
£618.00 incl VAT

A half tonne bag of UK produced poultry pellets. Ideal for adding nutrients and organic matter to improve plant growth and soil structure, releasing their nutrients slowly and breaking down naturally to improve the fertility of the soil.
£378.00 incl VAT

Perfect for all plants, both inside and out, Proctors Liquid Seaweed will transform your garden and potted plants, producing brighter flowers, greener lawns and delicious vegetables.
£14.10 incl VAT

Well cared for roses will need regular feeding, especially at the beginning of the growing season.
£34.50 incl VAT

Instructions on how to take your soil test, sample bag, and pre-paid envelope to send sample direct to independent lab. Test is for Phosphate, Potash, Magnesium and pH. Results and recommendations are then sent via email.
£32.00 incl VAT

This very safe to use product is designed for all lawn types of all sizes.
£1,548.00 incl VAT

This very safe to use product is designed for all lawn types of all sizes.
£40.56 incl VAT

This very safe to use product is designed for all lawn types of all sizes.
£19.29 incl VAT

For spring and summer use on outfield areas.
£822.00 incl VAT
Powered by nopCommerce